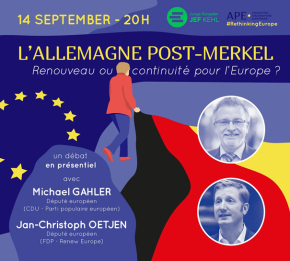 We are delighted to invite you to our first face-to-face event after the summer break.

On Tuesday 14 September, starting at 7.30 pm, in our Villa - 76 allée de la Robertsau Strasbourg - we will organise a conference-debate entitled "Post-Merkel Germany: Renewal or continuity for Europe? The evening will end with a cocktail.

This event is organised in cooperation with the Young Europeans of Kehl.

To participate in this meeting, it is imperative to confirm your presence by replying to this email.

On Sunday 26 September, German citizens will be called to vote for the renewal of the Bundestag, the lower house of the German Parliament. Angela Merkel, who has been Chancellor for 16 years, will not be seeking a fifth term. For Germany, but also for Europe, it is the end of an era. How might these impending elections redefine the political balance in Germany? What is the vision of the different parties on foreign and security policy, on climate policy and on economic and social policy? Depending on the governing coalition that might be formed after the vote, what might change for Europe?

We will try to answer these questions with two German MEPs:

Michael Gahler, a member of Chancellor Angela Merkel's Christian Democratic Party (CDU), is coordinator of the European People's Party group in the Foreign Affairs Committee. He is also Vice-Chairman of the Delegation to the ACP-EU Joint Parliamentary Assembly, and a member of the Delegation for relations with South Africa.
Jan-Christoph Oetjen, member of the FDP - the German Liberal Democrat party, is Vice-Chairman of the Committee on Transport and Tourism. He is also a member of the Committee on Development and of the Delegation to the ACP-EU Joint Parliamentary Assembly.
Prior to the conference, which starts at 20:00, there will be a series of workshops led by the Young Europeans of Kehl. These workshops will take place at 19:30. This will be an opportunity to better understand the functioning of the German electoral system and the different types of coalitions that can be formed after the vote; and in general, to discuss the European dimension of this issue.

At the end of the conference, we will be happy to share with you a moment of conviviality around a cocktail in the garden of our Villa. In case of bad weather, the cocktail will take place in our cellar.

For the health of all, the health pass will be required and controlled at the entrance and the barrier gestures must be respected.

We look forward to seeing you on this occasion and remain at your disposal for any further information.