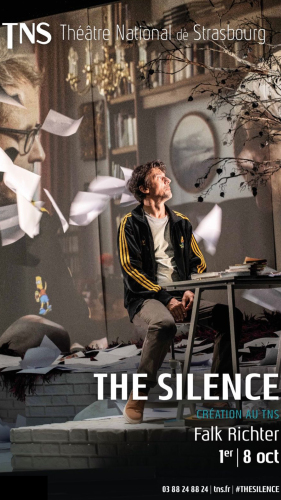 THE SILENCE at the Théâtre National de Strasbourg

For his new play THE SILENCE, the German writer-director Falk Richter undertakes research into his own family history. A journey into his past takes him back to his parents' house, which he left more than 30 years ago after coming out. The father died without a reconciliation with his son. But the son finally wants to break the silence that reigned in this place. He starts a discussion with his mother which takes him back to the hell of both their youth, his and his mother's.

In his performance, Falk Richter is very interested in the notion of silence in the intimate context of families and couples, but also in the social silence in the face of important political issues such as the threat of a climate catastrophe. For him, the family taboo is a reality, any family can complete the sentence: "In my family, we have never spoken about...".

In particular, the director returns to the process of silencing people, actively inducing someone not to ask questions, not to question common and contradictory accounts, not to speak about them.  He draws a strong parallel with the activist slogan of the LGBTG+ community in the 1980s "Silence - Death" denouncing the taboo of homophobia in society and advocating a free speech around the reality of homosexual people, beyond discriminatory and hurtful homophobic stereotypes.

By putting words to societal and family violence, to the aggressive neo-liberal individualism that governs our world, this show also highlights the great task for us and the generations to come to unlearn well-established practices such as racism, homophobia, misogyny, violence against women; against homosexuals and queer people.

Dates: From 1 to 8 October (excluding Sunday 2 October) at 8pm except Saturday 8 October at 4pm

Link to the show: https://www.tns.fr/thesilence

If you are interested in the show, you can buy tickets from our ticketing service which is open from Monday to Saturday from 1pm to 7pm or on the TNS website. https://www.tns.fr/billetterie