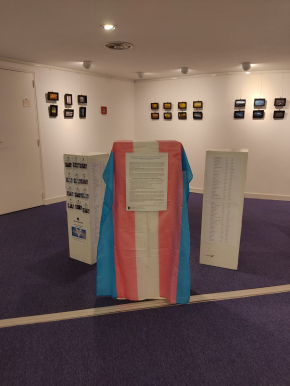 18 November Equality in Diversity (the LGBTQIA+ Section of the Amicale of the Council) was present with a flash expo in the Arts Club of the Palais. We thank the Arts Club for their support and collaboration!

This year again, at least 390* murders, direct or indirect, through social exclusion and suicide, of transgender or gender diverse people have been reported around the world. This represents only the tip of the iceberg of the total number of hate crimes on the grounds of gender identity or expression and sex characteristics. The Member States of the Council of Europe are not an exception: cases from 9 different member states were identified only in this year.

As highlighted in PACE Resolution 2417(2022), we are witnessing a rise in hatred and a backlash linked to a powerful anti-gender movement, supported by some political groups, media outlets and reactionary pseudo-feminist anti-gender pressure groups openly calling for the hatred, persecution and killing of transgender people.

Transphobia kills, as we unfortunately see every November 20th. This is in addition to other grounds of social exclusion, such as sexism, origin, ability, skin colour, race, type of work, social class and poverty: the majority of the victims we commemorate every November 20th are women, foreigners/migrants, undocumented migrants, sex workers, homeless people, and often they are all of these at the same time.

The oppression that kills them is cumulative, and so our struggle must be intersectional.

For example, in Europe, cases from Estonia and Switzerland were reported for the first time this year. The victims were migrant Black trans women – Sabrina Houston from Jamaica and Cristina Blackstar from Brazil. They were both stabbed to death in their own residences.

This day reminds us:

- that all over Europe, every day, transgender people are excluded, persecuted, hated, abused, violated, and often murdered or driven to suicide, solely because of their supposed "difference" from so-called sex and gender "norms";

- that the hatred that leads to transphobic crimes is not the result of random acts or of a few "evil" individuals, but that it is systemic, that it is one of the pillars of a political system and of a dominant social “norm” and culture that it creates, and that it produces a procession of discriminations that harm all of society: heteropatriarchy, sexism, homophobia, transphobia, racism, classism... ;

- that this political system kills: it is deadly, unacceptable and contrary to all human rights principles. Such principles no not require special "transgender legislation” as human rights are not special rights, but common law and equal rights which will afford survival.

for a public gathering organised by local transgender, queer, and feminist activist groups.