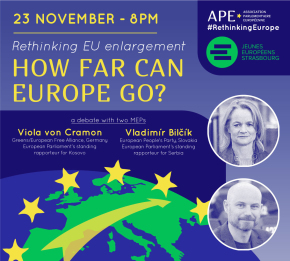 We are glad to invite you to a debate entitled “Rethinking EU enlargement. How far can Europe go?”, that will take place on the evening of Wednesday 23 November, starting at 8 pm, at 76 allée de la Robertsau, in Strasbourg. This event will be held in English, will be followed by a cocktail reception, and is co-organised by the European Parliamentary Association and the Young Europeans of Strasbourg.

Please fill in this form to register: https://forms.gle/kQ2GfFARh2u693yK8

While in recent years there has been little appetite for admitting new member states to the EU, the idea of European enlargement gained new impetus with the war in Ukraine. In June Ukraine and Moldova were awarded EU candidate status and several proposals have been made to increase cooperation with our neighbours, such as the creation of a European Political Community, suggested by French President Emmanuel Macron.

Questions to be addressed include: Is this the right time to relaunch the enlargement process? Is there really the political will for an acceleration of this process? What can the European Union do now to renew its promise of a European future for the Western Balkans? How can the EU prevent our eastern neighborhood from sliding into the orbit of other international powers? How can the newly formed European Political Community be part of the solution? What sort of future should the EU offer Ukraine now?

We’ll debate how far the EU should grow and how fast this process should be with two Members of the European Parliament:

We hope to see you there.