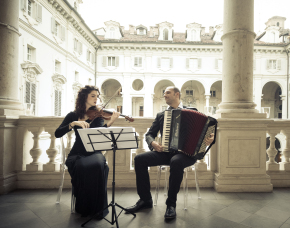 The Istituto Italiano di Cultura invites you to a free concert at the Istituto by the duo Matteo Castellan, accordion/composition and Giulia Subba, violin, on Tuesday 11 October 2022 at 6.30 pm.

The artists are stopping in Strasbourg after a European tour that took them to the Italian Cultural Institutes of Berlin, Munich, Lyon, Paris and Zurich to represent the Piedmont Region.

They propose a programme that aims to strike a balance between tradition and modernity, folk music and jazz, writing and improvisation, through a great variety of rhythms and colours due to the cosmopolitan nature of the two instruments (accordion and violin), born in Italy. A journey through Italian, European and American musical traditions, here revisited and enlivened.

Matteo Castellan
Accordionist, pianist and composer, born in Turin in 1973, he has performed in Italy and abroad. One of his projects, "Orchestra da Tre Soldi", won him the Best Jazz Award 2008. He has performed with artists such as Matthias Martelli, Guido Catalano, Gianluigi Carlone, Giorgio LiCalzi, Flaco Biondini. He composes stage music for important national theatre productions (Teatro Stabile Torino, Teatro Stabile dell'Umbria).

Giulia Subba
Born in Turin in 1993, after graduating from the Verdi Conservatory in Turin, she reached the highest levels of violin playing with Yulia Berinskaya; she performs in Italy and abroad with important orchestras. She has travelled to China, Argentina and India. She has collaborated with great artists such as Andrea Bocelli and Richard Galliano.