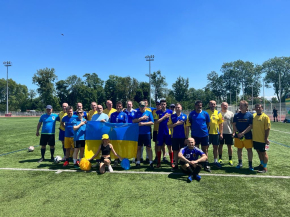 11 June: a memorable return of the football tournament

Worth the wait! The 11th edition of the Council of Europe inter-departmental football tournament, delayed by one year because of Covid-19, delivered another memorable day. Under a hot Strasbourg sun, around 180 players from 12 teams competed and regaled on the pitches, while kids with their faces painted bounced on the bouncy castle, and supporters enjoyed the camaraderie with a drink and quality food from local caterers.

On the pitch, there were some heavyweight clashes already in the morning Group Stage, with former winners Les Cons Primés (EDQM) and Commando Cyber (Cybercrime) going at it to secure top spot in their Group. The team from EDQM, as well as Lawcomotive (Court) and Moneyball (Moneyval) swept aside all challengers to top their respective groups.

During the lunchbreak came one of the most memorable moments: a charity match organised in aid of victims of the war in Ukraine was played following the Ukrainian national anthem and a moment of silence. Ukrainian famous former footballer Andriy Shevchenko sent his best wishes to the tournament. Local NGO PromoUkraïna was also on site to raise money for the victims.

Into the afternoon segment, and with the temperatures rising, so it was on the pitch with some red-hot clashes making up the knockout stages. Gradually, more teams fell aside, to leave two mouth-watering semi-finals: two heavyweights in Les Cons Primés and Moneyball, both oozing with quality, went at it with the EDQM side proving decisive. At the same time, tournament debutants Democratic Diabl@s (DGII) were underdogs against the large and experienced squad of Lawcomotive, and their battling quality finally fell short.

Moneyball, despite being held to a goalless draw by Democratic Diabl@s, managed to win a deserved 3rd place on penalties. Onto the final, and an early goal from Lawcomotive was the catalyst for a high-quality match. Despite the excellent efforts of Les Cons Primés and their multiple chances, they could not beat the goalkeeper. And their hopes were dashed in the final minute by an excellent second goal. Congratulations to Lawcomotive for their first win in the tournament! See the tournament website for the full results.

The Tournament organisers would like to express a big thank you to all the players and supporters who helped to make the day so memorable and fun, as well as to all those who supported the Football Section in putting on the tournament, including its sponsor, the Amicale.

PS. Now that you have tasted the good life of football, why not join the Football Section (Male or Female) by contacting us here.