Information
DEBATE: "Over the rainbow? LGBTI rights in Europe: Between reality and ambition" 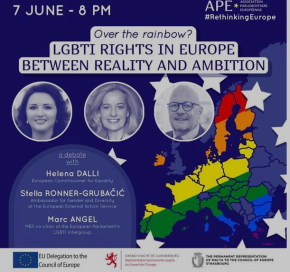 DEBATE: "Over the rainbow? LGBTI rights in Europe: Between reality and ambition"

The European Parliamentary Association and the Delegation of the European Union to the Council of Europe, in partnership with the Permanent Representations of Malta and Luxembourg to the Council of Europe, are glad to invite you to a debate titled “Over the rainbow? LGBTI rights in Europe: Between reality and ambition”, which will take place on Tuesday 7th of June, starting at 8 pm, at 76 avenue de la Robertsau, Strasbourg.

The event will be held in English and will be followed by a cocktail reception.

Please fill in the form to participate: https://forms.gle/wyUKcYUgrvr6HAx99

In the last twenty years, unprecedented progress has been made in many European countries in the area of LGBTI rights. The European Union and the Council of Europe have put the protection of these rights at the centre of their action, conscious that guaranteeing fundamental human rights to every citizen is what distinguishes democracies from autocratic regimes.

In a moment when political homophobia is on the rise, European institutions aspire to be the beacon of hope for their LGBTI citizens, but also for those people in the rest of the world, who are being persecuted because of their sexual orientation or their gender identity.

We’ll discuss about it with:

We hope to see you there.