Leisures-Dances Caribbean dances
25 March: the UN’s International Day of Remembrance of the Victims of Slavery and the Transatlantic Slave Trade 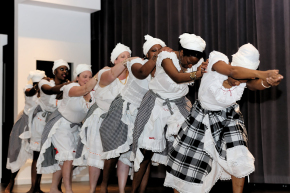 25 March: the UN’s International Day of Remembrance of the Victims of Slavery and the Transatlantic Slave Trade

The Caribbean Dance Section invites you to mark the International Day of Remembrance of the Victims of Slavery and the Transatlantic Slave Trade. Every year on 25 March, it offers the opportunity to honour and remember those who suffered and died at the hands of the brutal slavery system. The International Day also aims to raise awareness about the dangers of racism and prejudice today.

In March 2018, the Caribbean dances section joined together with the Association Karaïb’ Vibe to mark the 170th anniversary of the Abolition of Slavery. Conferences on the chosen theme of "Dance and slavery" and exhibitions on the topics of slavery in the Caribbean and of the heritage – in particular dance and literature – handed down by the slaves to their descendants were presented. The day was punctuated with demonstrations of dances and songs and activities with the public. The Council of Europe’s work on the fight against modern slavery was also highlighted to an interested public by the Executive Secretary of the Council of Europe Convention on Action against Trafficking in Human Beings.

In 2019, the emphasis was on the "language of drums" ("Tambou ka palé") in the cultural heritage of the Caribbean, with a round-table illustrated by percussion and dance.

Beside exhibitions on the topics of slavery in the Caribbean and on their heritage, in particular costumes and literature, a round table on costumes and their origins was presented. There were further demonstrations of songs and dances and activities with the public throughout the day. The Council of Europe’s work against modern slavery was again presented to a keen public by P. Nestorova. Furthermore, gospel songs were beautifully performed by the Choir of the Amicale of the Council of Europe.

In 2020 the commemoration had to be cancelled due to the pandemic and it is probable that this year’s commemoration will also need to be postponed depending on the development of the situation.

General Assembly meeting to commemorate the Day of Remembrance of the Victims of Slavery and the Transatlantic Slave Trade
25 March, 10:00 a.m. to 12.00 p.m. EDT
Watch on webtv.un.org/