Activities
Menu
70th anniversary of the Council of Europe

Culture 70th anniversary of the Council of Europe
DICK MARTY: a certain idea of justice 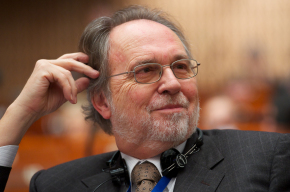 On 24 January 2019 Dick Marty will present, in Strasbourg, his recently-published book A Certain Idea of Justice (Lausanne: Favre, 2018, in French)

On this occasion, the ALDE group of the Parliamentary Assembly, Amicale of the Council of Europe and Maison de l’Europe Strasbourg-Alsace (MESA) have the pleasure to invite you to attend:

- 1-2 p.m., Palais de l’Europe*: a side event debate with the participation of Dick Marty and Linos-Alexandre Sicilianos, Vice-President of the European Court of Human Rights. French-English interpretation will be provided.

Dick Marty is a former member of the Parliamentary Assembly of the Council of Europe, rapporteur, inter alia, on secret CIA prisons in Europe, human rights in the North Caucasus, UN Security Council and EU terrorist black lists, abuse of state secrecy and national security, and illicit trafficking in human organs in Kosovo. Former Swiss Senator, Prosecutor General and member of Council of State of Ticino, he is currently a Vice-President of the World Organisation against Torture.