The next month at the Arts Club 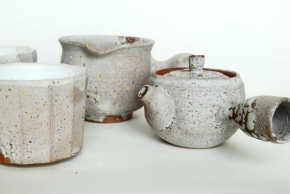 Andrzej Bero - A cup of calmness

In my work I blend two passions: for buddhism and zen esthetics and for pottery. From the very beginning of my activity I was interested in tea pottery. If I remember well, the second vessel I made in my life was a teapot. My work opens eyes to the abundance of traditions and rituals resulting in specific pottery shapes and to variety of tastes, shapes and smells of teas from Japan, China, Korea and India. This blend resulted in my own pottery style, enhanced with centuries long traditions of distant lands. The shape subordinated to the function is important - it is not just tea brewing, but also the creation of a harmonious atmosphere. That's why I avoid sharp angles, which is not difficult when I roll on a wheel, but I do not create edges or corners. Circular, gentle shapes are my idea of balance, unity.

I have been been doing pottery since 1990. I absolved pottery class at People’s University in Turno. Later on I worked with one of the oldest Polish pottery groups -KERAMOS Association. I participated in its international biennales since 1996 and before opening my own workshop in 2008 I was co-leading the KERAMOS studio. For over 10 years I was active as manual therapist in pottery workshop of a blind children’s center. I've built three wood-fired kilns, but living in the city I ended using mainly electric one. Fundamental need of contact with live fire I try to satisfy with raku gas kiln. I participated in many pottery workshops and art exhibitions both in Poland and abroad but for last 10 years I am focused mostly on making teawares for daily use for growing tea culture community all over the
world.
You can see them on tealovers tables in Germany, Austria, Czech Republic, Slovakia, Finland Romania, Italy, Spain, France, Great Britain, Belgium, the Netherlands, USA, Mexico, Canada, Japan, Indonesia, China, Korea, Singapure, Taiwan, Australia.